Thanks to their swimming robot modeled after a lamprey, EPFL scientists may have discovered why some vertebrates are able to retain their locomotor capabilities after a spinal cord lesion. The finding could also help improve the performance of swimming robots used for search and rescue missions and for environmental monitoring.

Scientists at the Biorobotics Laboratory (BioRob) at EPFL’s School of Engineering are developing innovative robots in order to study locomotion in animals and, ultimately, gain a better understanding of the neuroscience behind the generation of movement. One such robot is AgnathaX, a swimming robot employed in an international study with researchers from EPFL as well as Tohoku University in Japan, Institut Mines-Télécom Atlantique in Nantes, France, and Université de Sherbrooke in Canada. The  study has just been published in Science Robotics.

“Our goal with this robot was to examine how the nervous system processes sensory information so as to produce a given kind of movement,” says Prof. Auke Ijspeert, the head of BioRob. “This mechanism is hard to study in living organisms because the different components of the central and peripheral nervous systems* are highly interconnected within the spinal cord. That makes it hard to understand their dynamics and the influence they have on each other.”

AgnathaX is a long, undulating swimming robot designed to mimic a lamprey, which is a primitive eel-like fish. It contains a series of motors that actuate the robot’s ten segments, which replicate the muscles along a lamprey’s body. The robot also has force sensors distributed laterally along its segments that work like the pressure-sensitive cells on a lamprey’s skin and detect the force of the water against the animal.

The research team ran mathematical models with their robot to simulate the different components of the nervous system and better understand its intricate dynamics. “We had AgnathaX swim in a pool equipped with a motion tracking system so that we could measure the robot’s movements,” says Laura Paez, a PhD student at BioRob. “As it swam, we selectively activated and deactivated the central and peripheral inputs and outputs of the nervous system at each segment, so that we could test our hypotheses about the neuroscience involved.”

The scientists found that both the central and peripheral nervous systems contribute to the generation of robust locomotion. The benefit of having the two systems work in tandem is that it provides increased resilience against neural disruptions, such as failures in the communication between body segments or muted sensing mechanisms. “In other words, by drawing on a combination of central and peripheral components, the robot could resist a larger number of neural disruptions and keep swimming at high speeds, as opposed to robots with only one kind of component,” says Kamilo Melo, a co-author of the study. “We also found that the force sensors in the skin of the robot, along with the physical interactions of the robot’s body and the water, provide useful signals for generating and synchronizing the rhythmic muscle activity necessary for locomotion.” As a result, when the scientists cut communication between the different segments of the robot to simulate a spinal cord lesion, the signals from the pressure sensors measuring the pressure of the water pushing against the robot’s body were enough to maintain its undulating motion.

These findings can be used to design more effective swimming robots for search and rescue missions and environmental monitoring. For instance, the controllers and force sensors developed by the scientists can help such robots navigate through flow perturbations and better withstand damage to their technical components. The study also has ramifications in the field of neuroscience. It confirms that peripheral mechanisms provide an important function which is possibly being overshadowed by the well-known central mechanisms. “These peripheral mechanisms could play an important role in the recovery of motor function after spinal cord injury, because, in principle, no connections between different parts of the spinal cord are needed to maintain a traveling wave along the body,” says Robin Thandiackal, a co-author of the study. “That could explain why some vertebrates are able to retain their locomotor capabilities after a spinal cord lesion.” 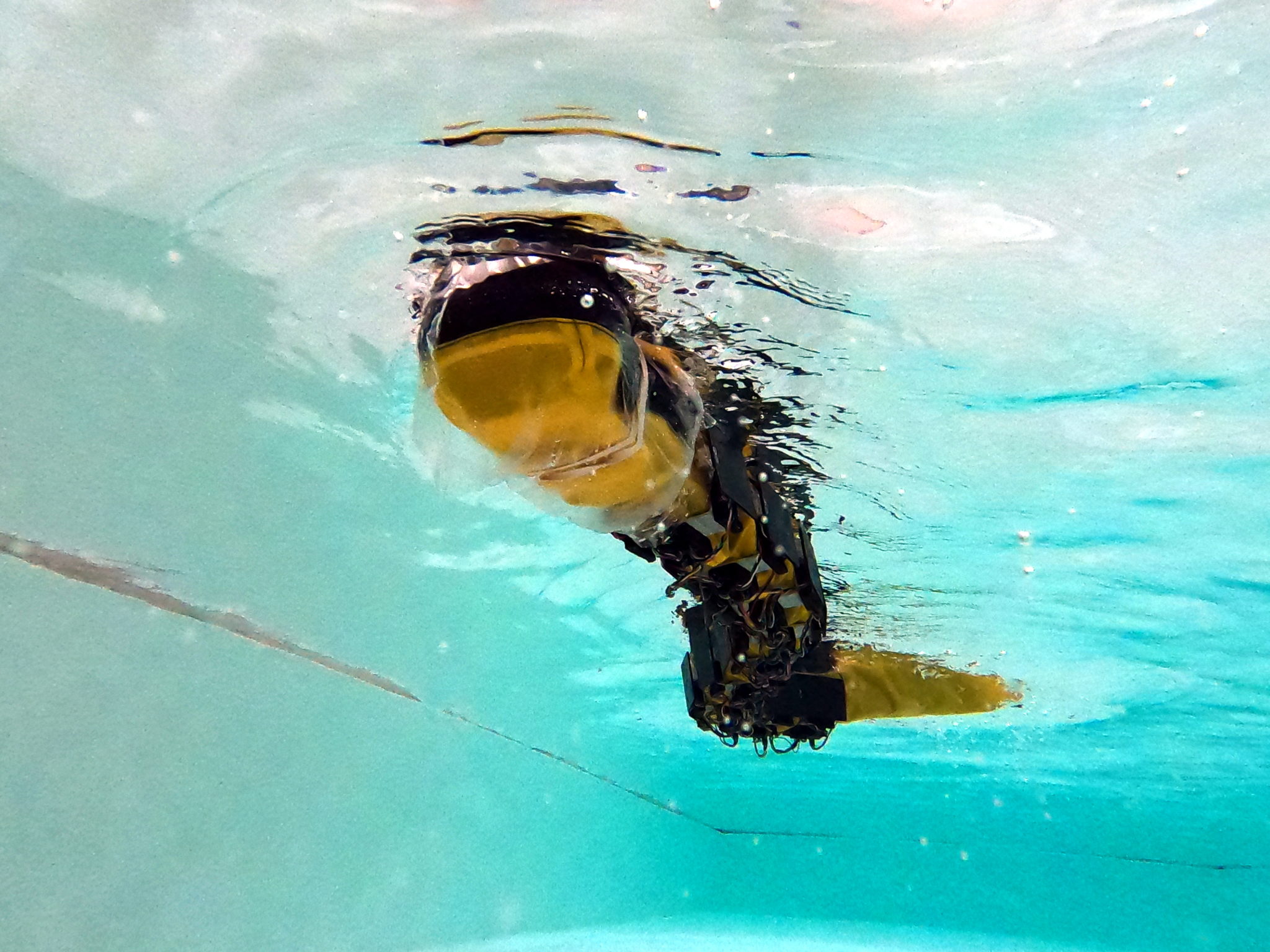