Developed by Grégoire Courtine’s lab, RYSEN is a robotic system for gravity assistance and locomotion restoration in patients with walking impairments, which allows them to operate within a wide area and to be tested in a wide range of activities, from standing and walking to walking along a slalom or horizontal ladder light projected onto the floor. The researchers have developed an algorithm to take measurements of how the patient is walking and update the support given to them as they complete their training.

The system was featured on the cover of Science Translational Medicine in 2017.

The goal of this project, launched at the end of 2018, is to allow subjects to control an additional robotic limb in combination with the natural arms and hands, while performing activities of daily living.
To achieve this goal, NCCR Robotics researchers are going to develop a novel bidirectional human-machine interface (HMI). Decoding will be based on the combined processing of electroencepha- lographic (EEG), electromyographic (EMG) and kinematic information from are- as such as neck and trunk while sensory feedback will be provided using while sensory feedback will be provided using non-invasive techniques. In parallel, a wearable robotic device – i.e. the “third arm” – will be developed. It will enable complex motion behaviour combined with intuitive user control, and it will be adaptable to different tasks and users.
The project is led by Silvestro Micera at EPFL, who is collaborating with Aude Billard on the interfaces used to control of the third arm. Jaime Paik’s lab is developing the robotic arm using soft pneumatic actuators, while Roger Gassert at ETH Zurich and Laura Marchal-Crespo at the University of Bern are developing training protocols and participative design methods to make sure the new robot fits the needs of users. 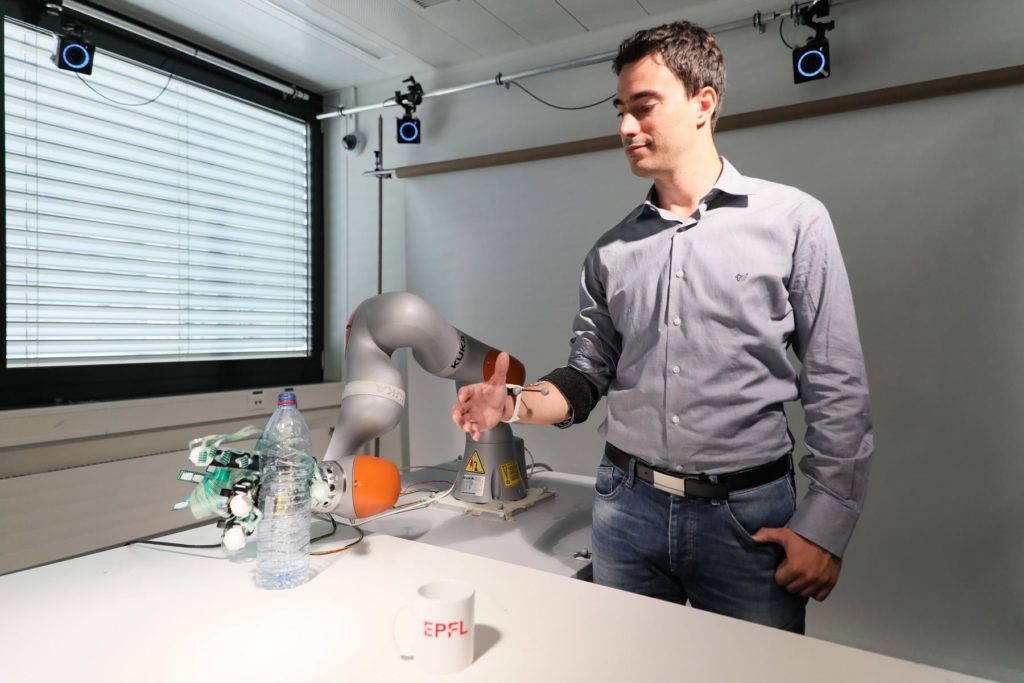