Robots that walk and crawl on unpredicatble terrains

In addition to flying robots, legged robots can play a key role in helping a rescue team because of their ability to carry heavy payloads, to perform long-duration missions, to interact with the environment and to move in complex terrains. Legged robots that can operate in such grounds must be able to apply different gaits and maneuvers depending on the terrain and obstacles. The objective of this project was to improve the state of the art in visual and haptic environment perception, navigation, motion planning and control for legged robots.

ANYmal is one of the two quadrupedal robots that have been developed in order to be deployed on the field and work in harsh conditions.

It is designed for autonomous operation in challenging environments. Thanks to incorporated laser sensors and cameras, the robot can perceive its environment, accurately localize, and autonomously plan its navigation path and carefully select footholds while walking. With a weight of about 30 kg, ANYmal can be easily transported and deployed by a single operator.

In the third phase NCCR Robotics (2018-2022) researchers improved the locomotion skills of ANYmal and thus made it capable of dealing with situations that might be encountered in a search and rescue scenario, and they integrated as well an arm on ANYmal. This way, the machine became even more versatile: it has the potential to manipulate objects, to move through closed doors, or simply to use the arm as an additional point of contact.

Krock-2 is another quadruped robot which reuses the sturdy base of the previous Krock-1 and expands it with additional features, sensors and subsystems to make it suitable for disaster response missions. In particular, the inclusion of force sensors gives the robot the ability to feel its immediate environment, which can be used to improve its locomotion capabilities. Krock-2 can now both surpass obstacles twice as high as the robot itself (15 cm) and move under narrow passages of the same height.
In addition, the construction of the robot is modular, meaning that pieces can be replaced easily on the field. It also presents mechanical symmetry from top to bottom, front to back and left to right, making the robot able to operate in any condition after a fall.

A similar robot developed by NCCR Robotics researchers was used to recreate the gait of an extinct animal, based on its fossil remains 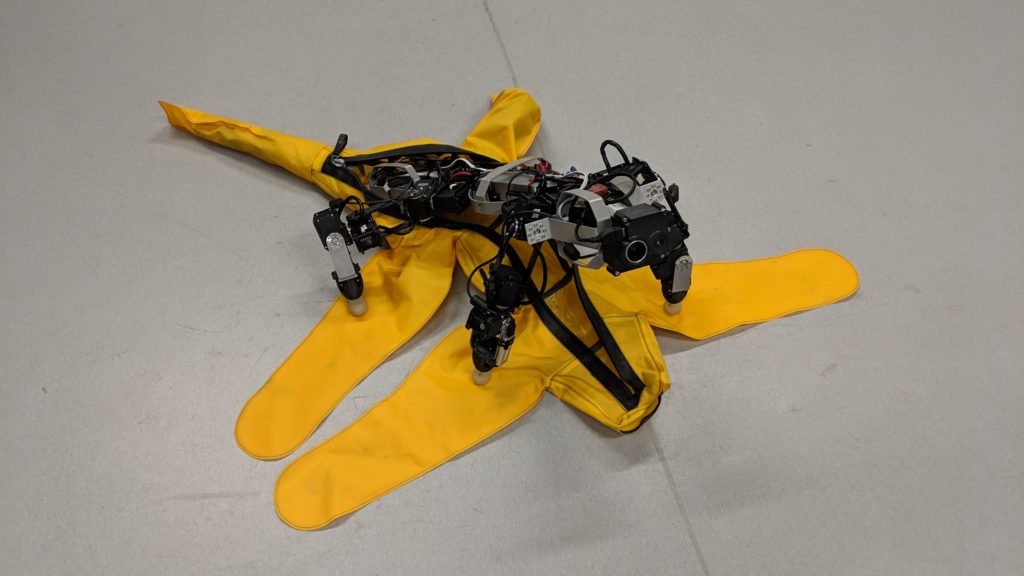