Getting into Robotics: Robert Riener 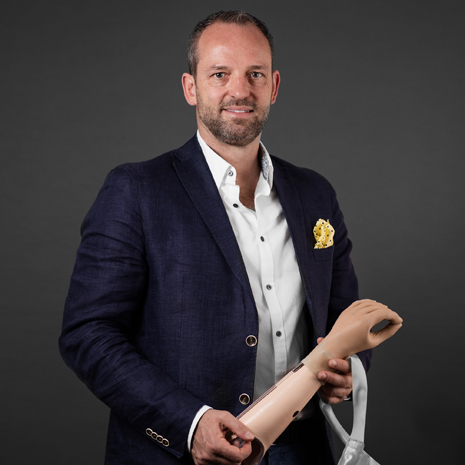 My father was a car mechanic and he always explained me how cars and machines function. I liked this. I was about 7 years old or even younger that I designed a perpetuum mobile on paper, connecting an electric motor with a bicycle dynamo. But my father couldn’t explain me, why this would not work. And when I started to read books about famous researchers, I knew already with 9 years that I wanted to become a researcher. With 10 I decided to go to the gymnasium, against the plan of my parents (ok, my grades weren’t the best, but they were still sufficient to enter). I also liked nature, microscopy and human anatomy, and I also developed an interest in medicine. I spent all my pocket money for chemicals, Erlenmeyer flasks, test tubes etc. Thus, the fact that I became an engineer doing research in biomedical engineering is not that surprising.

What is the most adventurous thing you have ever done?
Studying little explosions of black powder and making fire in the dry bush (in the middle of a dry summer). That was not clever (I was very young though). But I learnt a lot.

So, how did you get into robotics from there?
I always loved movements! Movements of motors and cars, movements of smoke in my chemical experiments, movements of dyes in liquids, movements of little animals in the microscope, movements of human muscles and the entire body.
When I started my PhD in 1993, I had to simulate the movement of a human body in order to design rehabilitation methods for spinal cord injured people. Later I applied robots to help these people train and relearn gait and arm movements

Did you always know you wanted to study robotics or did you at any point consider other career paths?
My driving force was to become a researcher. The branch was not so important. I did consider medicine first (but missed the admission tests for it), I also liked chemistry, electronics, physics and even mathematics. But probably because of my early imprints through my father’s work as car mechanic, I ended up in mechanical engineering. As PhD student I started to work on human movement analysis and simulation. My first developments in robotics were, when I was a Postdoc, around 1999.

What made you branch out into working in human sensory motor control?
Actually, I first worked in human sensory-motor control, when I started my PhD. Later I added robotics to help patients with paralysis to walk and do arm movements. (Now my field is called rehabilitation robotics)

What role do you think this field will play in society in the future?
My field of rehabilitation robotics plays a more and more important role in medicine and society. More and more therapists are accepting these machines as tools that help them to make the rehabilitation of patients with neurological lesions more effective. More and more hospitals are getting these machines and the first proofs exist that show that robot-aided training can really help to improve body function and quality of life in patients after stroke or spinal cord injury. The next phase has already started, where these technologies become mobile and wearable and can be used not only as a therapeutic device but also to assist people with neurological lesions in daily life.

What has been the biggest surprise whilst organizing the Cybathlon?
The biggest surprise was that we get so much positive feedback from so many different stakeholders including patients, patient organisations, research labs, sponsors, politicians, and the media. For instance, after we uploaded the first Cybathlon Trailer last April, within 2 weeks about 100 journalists from radio stations, newspapers, news magazines etc contacted us in order to get further information and interviews.
This boom is ongoing, and the in meantime there are large television companies in the UK, Germany and Japan who broadcast the Cybathlon in their countries. About 7 million people just saw a Cybathlon show in Japan on NHK. Even Hollywood is planning a large show.

What advice for those who would like to consider studying robotics in the future?
They should do what they love to do, where they have most fun. They should not bother if it is in the medical field or if there is a good employment situation. However, if the society like it, because it saves lives, heals, helps or entertains, it has its justification. Students should try to find a focus and get deep into one or two topics and avoid staying too superficial on the surface.

I was perhaps a half year old
With my sister, when I was about 12 years old
When I became 7
This was 1987, when I was 19 I just started to study mechanical engineering at TU Munich
2002, when I was 34 and a postdoc at TU Munich. I worked on knee joint biomechanics and worked on a robot that was connected to a phantom plastic knee to allow joint movement and injury detection, by using the entire system as haptic display. About 10 patents evolved out of this kind of work and a robotic birth simulator was developed and sold by a company in Germany (3B Scientific) that allows learning and training of complicated human deliveries on the simulator.
2008 already as Associate Professor at ETH Zurich