Getting into Robotics: Auke Ijspeert 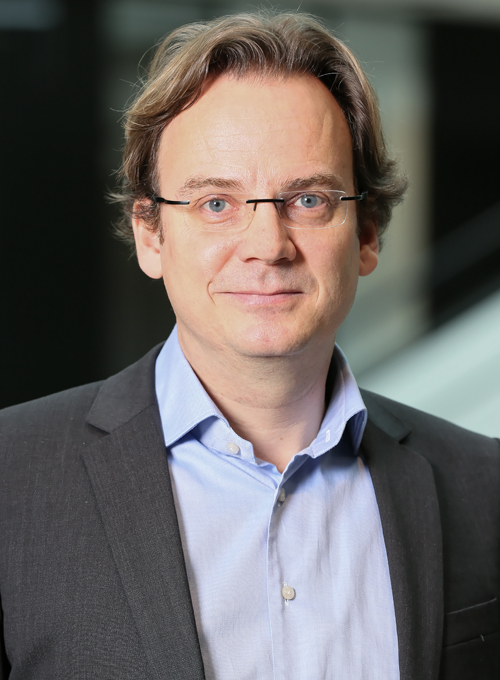 What were you like in school and as a teenager?
I had good grades, and was well-behaved and very shy. My parents did a lot of handy work in our house (e.g. transforming and expanding it) and I enjoyed helping them.

With my father, we often tinkered together, e.g. we made a very simple robot made of a can that could make little steps to move forward (no picture unfortunately). I also enjoyed programming and playing with my first computer (a TI99), drawing, and playing the violin.

Later as a teenager I loved travelling with a back-pack, first with several InterRail trips through western and eastern Europe, later with travels in more exotic places.

At eighteen I had the chance to participate to a tour of India with a youth association that brought medicines to a clinic in Calcutta and school material to a school for Tibetan refugee children in North India. We met Mother Theresa and the Dalai Lama, and the whole trip was an amazing experience. It completely changed my view of the world, making me aware how lucky and spoiled we are in Western countries. After that I made multiple backpacking trips to countries like India, Nepal, China, Thailand, and Indonesia.

As hobbies, I enjoy playing with my daughters, running along the lake or in popular races such at the 20Km or the half-marathon of Lausanne, and making naïve art paintings of sceneries loosely inspired from my travels.

Did you always know you wanted to study robotics or did you at any point consider other career paths? Have you always had an interest in animals and physiology?
I had many interests but robotics came later. At the end of the Gymnasium (High-School), I hesitated between physics, medicine, biology or architecture. As I was not sure what to choose, I chose physics (at EPFL) to keep most options open. I am glad I did. I am also very glad to end up working in robotics as my current research touches on topics related to medicine (restoring locomotion), biology (understanding animal locomotion), and architecture (with our Roombots project on adaptive furniture and intelligent environments).

How did you end up in research from there?
During my studies in physics, I always liked courses related to biophysics, i.e. the physics of living systems. In one of the courses, we were presented a neural network model called the Hopfield network that represents an associative memory. I was fascinated by its behavior and the fact that a mathematical model could emulate an important biological property. I then decided to join a Master program in Artificial Intelligence (AI) at the University of Edinburgh (UK) that included lectures on AI and on artificial neural networks.

How did your work evolve into bio-inspired robots?
Two factors played a role. First, was a course given by John Hallam on autonomous robotics that also involved a robot competition in which teams had to develop and program a robot made of LEGO to play some kind of rugby. Together with Aude Billard (also NCCR an professor) we joined the course and after some hard work over a semester, we won the competition out of 16 teams. I found it very exciting to design and program a robot to perform autonomously against other robots. A second factor was related to my master project. During the Christmas break, I happened to read a very nice paper on computational models of the lamprey swimming circuits by Sten Grillner’s group, and decided to propose a similar topic as a master project. The project went very well, and I could demonstrate that using genetic algorithms to set parameters in such models could lead to models that are closer to biological data than the original model. I proposed to John Hallam to transform this into a PhD thesis and I was glad he accepted to be my supervisor. During my PhD thesis I expanded the neuromechanical models of the lamprey and studied the transition to ground locomotion in the salamander. This was all done in simulation but I always dreamt of testing my ideas in real robots. This happened only several years later when I returned to EPFL as an SNF assistant professor. In the meanwhile I had done some additional work in collective robotics (with Alcherio Martinoli and Luca Gambardela during a short postdoc at EPFL) and on computational neuroscience and humanoid robotics with Michael Arbib and Stefan Schaal at the University of Southern California.

How do you think robotics will change in the next few years?
We are living an exciting time in robotics. Robotics technology is being used in many applications such as autonomous cars, autonomous warehouses, automated transport, and prosthetic devices. I think that robotics will help us have a better quality of life. Rather than a multipurpose robotic servant at home, I think that robotics technology will more and more be merged in our environment e.g. in our furniture, in our cars and in our offices.

I am also excited to see more and more robots being used as scientific tools. For locomotion for instance, a robot can nicely complement simulations, and be used as a physical model to investigate questions related to the neuroscience and biomechanics of animal locomotion.

What do you think are the greatest challenges for bio-inspired robots in general the future?
Locomotion in unstructured terrains with mud, grass, sand and water, as is found in forests and mountains for instance, is still an enormous challenge, and is an area in which animals still largely outperform robots. Being able to do this properly requires good advances in mechanical design of robots, in perception, and in locomotion control algorithms.

What advice for those who would like to consider going into robotics research in the future?
Go for it! Robotics is exciting because it is very interdisciplinary. It requires putting together skills from many domains (mathematics, control engineering, mechanical engineering, electrical engineering, programming, etc.), and will typically involve working in a team. It also leads to skills that are transferable to many other domains of engineering, especially domains that need a global approach, with the integration of many components.

…and to those who wish to follow an academic path?
Follow your passion, be ready to move to different places, and interact with people with different technical background. Do not underestimate social aspects. Indeed, it is only later in my career that I realized the importance of reference letters in finding a position (I naively thought that a strong CV was sufficient). So make sure to meet and present your ideas to as many people as possible. I feel blessed to have an academic position, and I strongly encourage students to try an academic path. It is not easy but worth the effort.